The Origins of Lottery and the Game of Keno 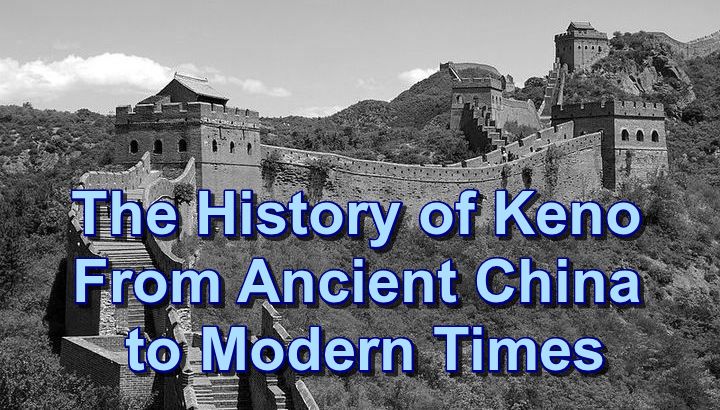 Lottery games have been in existence since ancient times. However, the concept was different from the modern age lottery games that you see in casinos or on the internet.

Lottery games began in ancient China and then spread to other parts of the world. One example of these games is Keno, which has naturally evolved throughout the centuries.

It began as a way of extracting money from the public, but today players can access the game on their laptops due to development in technology.

The article will help you understand how the lottery has developed from ancient China to the rest of the world.

The lottery was in use as early as 205 to 187 BC or during the Han Dynasty. Keno was a lottery-like game of choice back then. The game is still available in several casinos to date. The ancient keno was also known as white pigeon ticket or baige piao. Participants in this lottery-style game selected a series of characters or numbers, and received rewards if what they picked appeared in a random drawing.

The reason why an individual working under the Han Dynasty whose name was Cheung Leung, created keno, was to get money from the public. Gambling was a fun alternative way of obtaining money from citizens since people were tired of paying taxes. Keno had 120 characters out of the 1000 Chinese characters, laid in a lotto board format, where players were required to place up to 10 bets. They used a pen to mark the character spot, leading to the term keno spot.

The game spread to villages, and the administration encouraged people to participate so that it could raise funds. The administration used the revenues it generated from the practice to supplement costs in government projects. For instance, money from the keno lottery financed the construction of the Great Wall of China.

The Spread of Keno

Many Chinese workers migrated to the US in the 19th century to participate in railway construction. These immigrants brought along keno with them and changed the name to the Chinese Lottery. The game was popular in San Francisco due to a high concentration of Chinese immigrants.

They also changed characters to Arabic numerals to attract English speaking players, thus increasing the use of keno in America. However, the game was viewed as a lottery; therefore, it was illegal to play it in public. For that reason, it changed its name to Race Horse Keno.

As a result, players could carry out their keno bets pretending to be placing the horse racing bets. That is the origin of the term, ‘races’ in keno games. Lotteries were later legalized in the 20th century, contributing to the spread of the game in other parts of the world.

The Game of Keno in Casinos

Gambling was legalized in the early twentieth century, which led to the introduction of keno in casinos. It began by writing 80 numbers on a piece of paper, and rolling them up into the tubes. With time the papers were replaced with wooden balls known as peas.

Warren Nelson, the owner of the Club Cal-Neva casino, developed a rotating cage and used it to draw numbers in 1936. He introduced the first Keno casino in the Palace Club, while Joe Lydon introduced it at the Fremont in Las Vegas. In 1963, the keno game cumulative payout was capped at $25,000; later in 1979, it was increased to $50,000. The maximum payout limits were abolished in 1989, and today each Keno casino sets its limits. Therefore, casinos can pay out dreamt-off jackpot prizes to its keno players.

Technological advancement has aided the spread of this game. For instance, computers have made it easy to play keno games. Today, gamblers can access online keno games on online casinos where they can play a mixture of games ranging from lotteries to slot machines; right like the Lottoland slots games here listed. Furthermore, millions of people across the globe play keno online. Thus, the Chinese lucky number game has expanded to the entire world.

Today, the game has changed from what was available in ancient China over 3000 years ago. The development of lottery along the years shows that the Chinese knew what they were doing. The old characters in the ancient Chinese poem known as "The Thousand Character Classic" were 1000, but keno used only 120 characters.

Today, the board has 80 numbers, and players are required to select 15. The game led to the construction of the Great Wall of China, and this stands as a testament to the glory of the lottery, and particularly the game of keno.

Online Roulette - Some basics for beginners
Although roulette is truly a game of chance, it should be analyzed carefully to increase the probability... read more

Online Blackjack - The optimal blackjack strategy
Black jack is in an incredibly popular game across the entire world. Millions of hands are held every... read more

3 Things You Should Know About Soccer World Cup Betting
The soccer world cup is one of the most important events for thousands of fans all over the globe, and... read more

Online Gambling Regulations being Discussed amongst State and Fed Officials
Currently in all of the states in the USA whatever is won or earned through the means of online gambling... read more